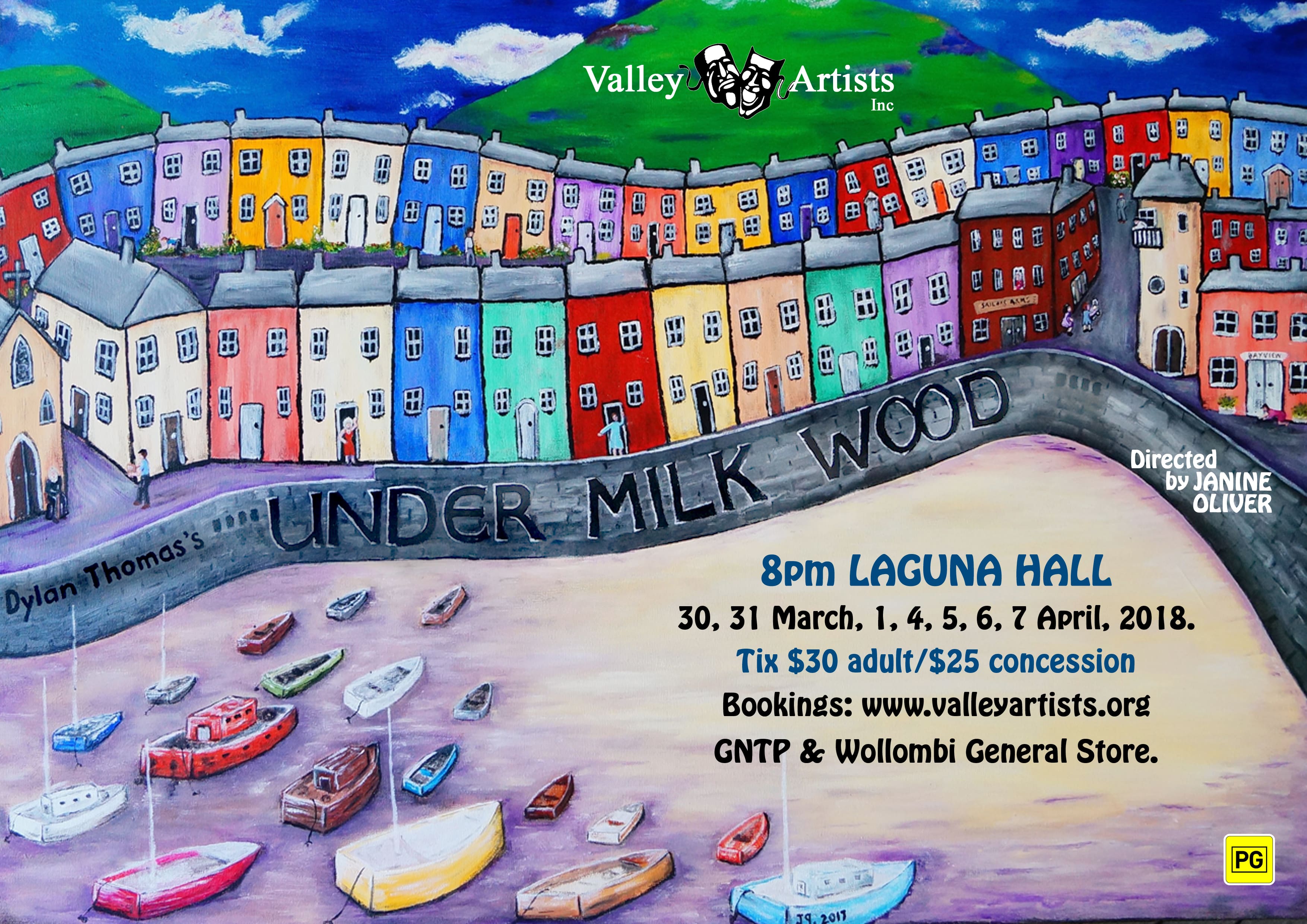 From a very early age the great Welsh poet Dylan Thomas fell in love with the sound of language and showed brilliance with word play. Although of Welsh heritage, from Swansea, South Wales, Thomas wrote exclusively in English. Nevertheless, he connected all his life with Welsh landscapes and people, and lived there most of his life.
Nowhere is his boldness with language and understanding of his own people more evident than in Under Milk Wood, his most famous, and last, work, completed in 1953 just before his death aged 39. Its inspirations are Welsh villages where he lived at different times with his wife Catherine.
Set in the fictional village of Llareggub, (read backwards) the play has often been described as dreamlike and hypnotic, its characters and events introduced by a narrator (First Voice) who gently steers us in and out of the lives of the village people, both living and dead, over one 24 hour period in spring. It’s about ‘nothing’ yet ‘everything’ to quote one commentator. It has musicality, mournfulness and mischief, say others – a depiction in a sense, of Wales itself.
The power of Under Milk Wood is rooted in the magic of language in the hands of a master. Life is conjured through word play, snippets of conversation, asides and monologue. A ‘play for voices’ commissioned by BBC Radio, it’s been adapted many times for stage, and twice for film.
Valley Artists are now offering their own fine staging of this masterpiece (adapted by Janine Oliver and Chris Davey), with experienced director/producer Janine at the helm. It’s a daunting challenge, but they and their team are more than up to it. At the first run- through rehearsal, I was struck by strong similarities with dance. The wondrous musical language leads, the rest follows, yet characters, place and language are indivisible.
The cast of 15 (covering 57 parts) – including some first timers on stage – bring us the accents, the feel, the look, of an authentic 1950s Welsh fishing community. The set is an ingenious intimate ‘pop up’ village that takes us right into its rooms and streets. Accomplished sound and lighting support and experienced backstage teams complete the production.
We’re used to the VA way of doing things: numbers of talented committed volunteers just making it happen, at a very high standard. We try not to take it for granted. And they’ve done it again.
I feel sure you’ll find this delightful production of Under Milk Wood amusing, moving and memorable. For a short time only, a bunch of unforgettable folk from of a South Wales village are ‘popping in’ to our New South Wales village and valley. It’s definitely worth getting to know them.
Under Milk Wood performances: 30, 31 Mar, 1, 4, 5 6, 7 April, Laguna Hall.

The Sculpture Garden
Scroll to top