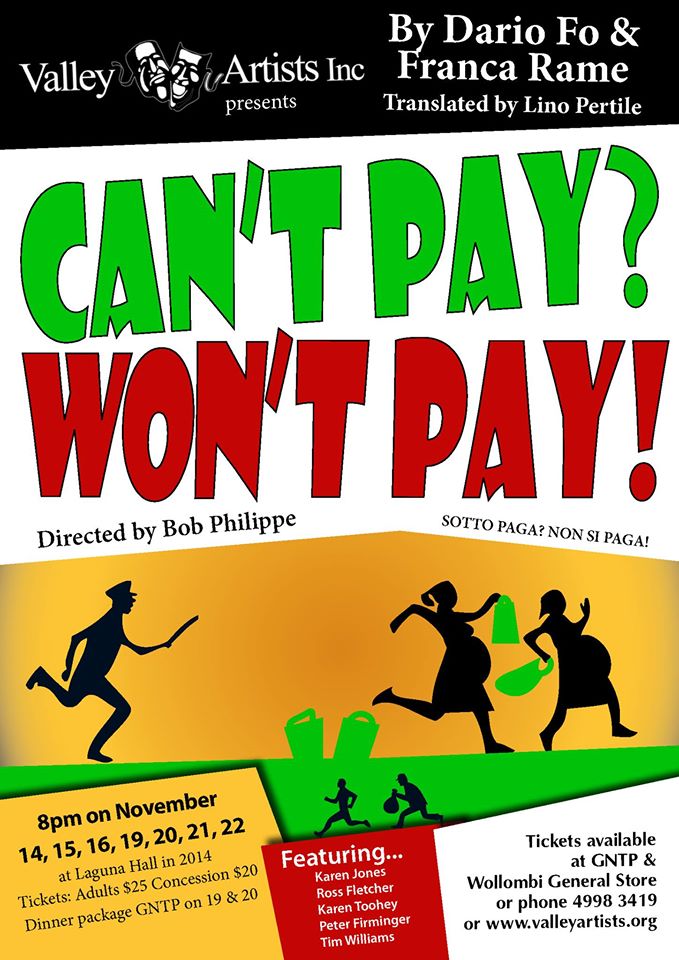 Can’t pay? Won’t pay! first came to Bob’s attention in the late 70’s. “Id been keen to visit the play since then. So on this, the twelfth occasion of my directing for Valley Artists, I’ve been excited to give it a go and I’ve not been disappointed. This is indeed a very fun piece of theatre. Dario Fo is one of world’s most performed living playwrights. He is a very clever and funny satirist and his most popular plays Accidental Death of an Anarchist, Mistero Buffo and this play are performed regularly around the world. During the turbulent 60/70’s in Italy, Fo and his wife/partner Franca Rame, founded the theatrical collective La Comune and were writing and performing satires for workers in factories, car parks and workers’ clubs. Their works were seen by thousands and not only became an important political intervention in Italy but went on to receive international acclaim. Fo is at once extremely traditional and extremely modern. He is traditional in that his theatrical roots lie in the Renaissance Commedia dell’arte with its stereotypical comic characters. Many of you will know of this wonderful period of grass roots travelling theatre and may even remember Valley Artists presentation some years ago. Witness women appalled by the outrageous rise in the cost of food. Sound familiar? The setting of Can’t Pay? Won’t Pay! is Milan but the problems are all too desperately familiar to us in Australia in 2014. This, however, is no gloomy political agitation. Fo-faced farce wears a broad smile and proceeds at breathtaking speed.”