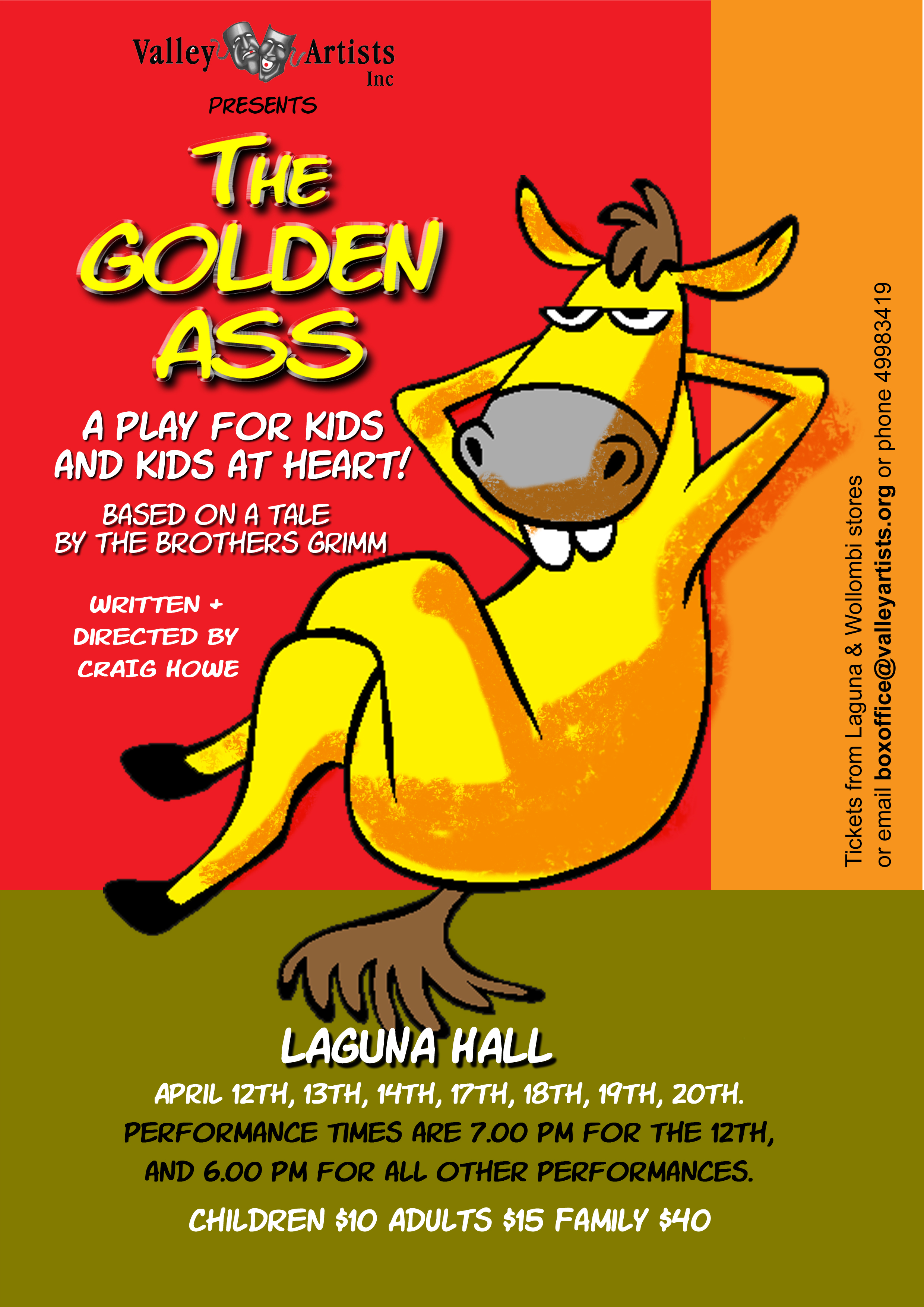 “This is all very disappointing.” While this was one of my favourite lines from Valley Artists’ recent production, ‘The Golden Ass’, it in no way represents the play. I was privileged to see this show twice and loved it both times.

First-time Director Craig Howe, in conjunction with a big cast and crew, gave us a very funny and thought-provoking evening. With complex sets portraying a mountain-side, a farm-house and barn, a tavern (‘The Gilded Armpit’) and three different masters’ workshops, enthralled audiences of adults and children were very credibly transported from location to location at rapid-fire pace.

A goat-farmer’s three daughters (played by Audrey Howe, Matilda ‘Tilly’ James and Gabby Miller ) took turns tending to the family’s prize goat, before each being thrown out of the family home after the goat (misunderstanding the reason why the family wanted her fattened up to peak condition) betrayed them to their father. The daughters’ characters interacted well with their parents, particularly with their mother, and they each had an interesting take on the skills they learnt during their various apprenticeships.

As always, Ken Barnett and Karen Butler- Hues gave realistic and hilarious performances, this time as the farmer husband and his wife – even having to be ‘reminded’ to reappear on stage in the morning after they had retired to bed in the previous scene. Ken played a rather tough and disbelieving father perfectly then showed great remorse after learning of his goat’s duplicity. Karen’s over-melodramatic style was perfect for a mother struggling with the daily realities of a harsh life to feed her family (and what food it was!) who also had to face seeing her daughters unjustly sent away.

‘The Guilded/Gilded Armpit’ was staffed by a very able Ben James who played his evil character in the style of the great silent movie villains. The bar patrons portrayed their characters with great enthusiasm (there must be a much younger drinking age where the play is set).

As the local mayor Alison, the only human actually named in the play, Reanna Ede played her part with great aplomb, switching from an obsequious character looking to make great riches to a nose-in-the-air snob when she found it was not to be.

This brings me to newcomer Matt Thomas who carried four roles in the play. He showed great flexibility in his performance, first as a bored and unwilling Narrator, before transforming himself into the three masters (a carpenter, Alpaca breeder and Martial Artist). For those of you who missed the show you will probably never have the opportunity to experience a Kung Fu Master with the unexpected “och aye” accent. Hopefully we will see Matt’s comic skills again in future Valley Artists productions.

On a final note, both the goat and the ass of the title, played by Oliver Debus and Rudi Howe, performed with much vigour and imagination. It was also fascinating to see the amount of independence shown by the rear end of each of these animals!

Anyone who missed this show should be kicking themselves in the ‘ass’. We look forward to seeing much more from the actors who made this show such a success. Kudos also goes to those behind the scenes from wardrobe to sets, sound and lighting and the production team. We also thank you for the time and effort you have put into what is among the best Valley Artists productions I have seen.