The Rise & Fall of Little Voice

You are here: Home / Productions / The Rise & Fall of Little Voice 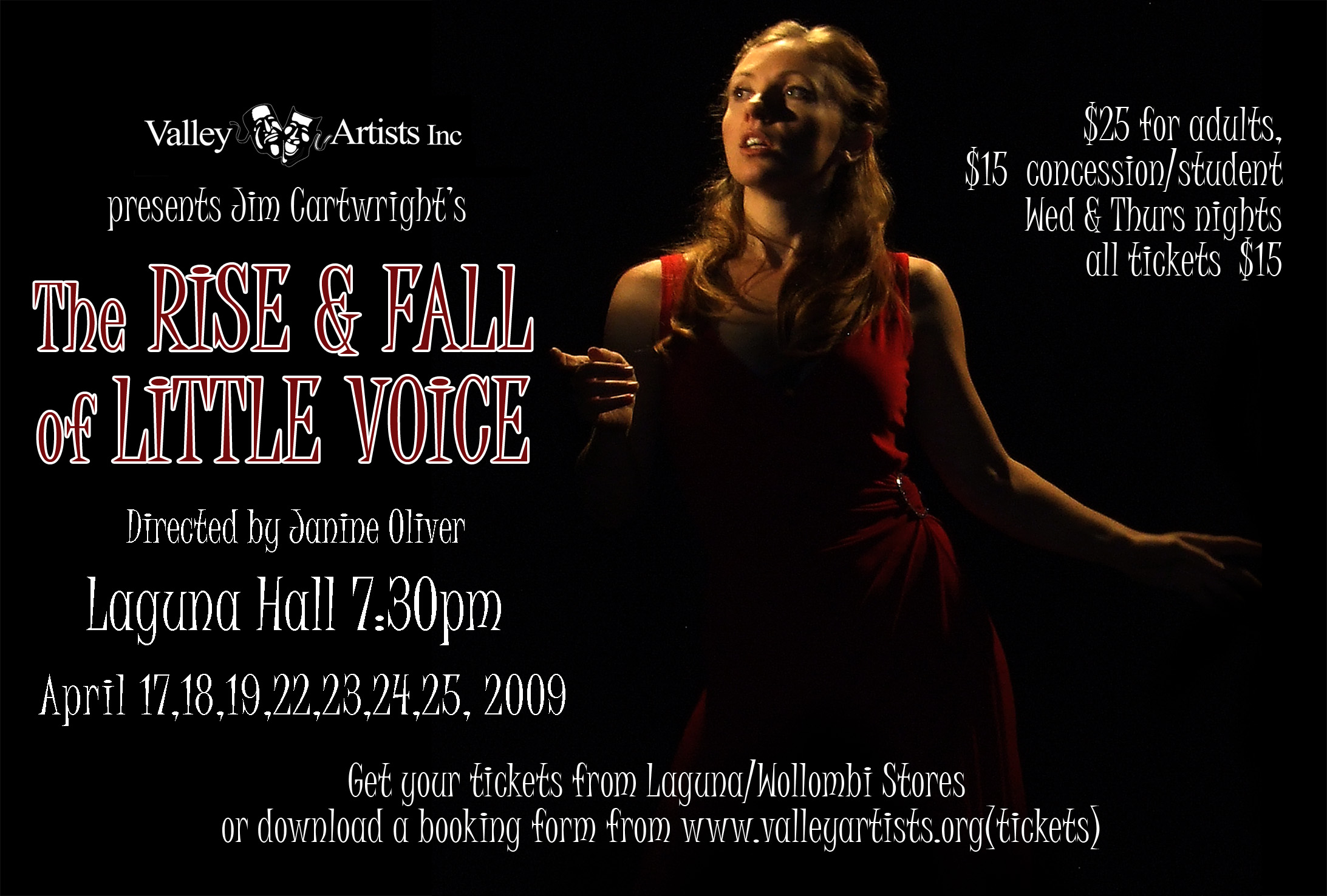 The Rise And Fall Of Little Voice

From the Director – Many thanks to Valley Artists Incorporated for allowing me to direct this play, particularly to my producers Leanne Bell and Louise Clarke for keeping a watchful eye on the budget me and the financial crisis we farce. AND, for Pixie Pete (Fewtrell) for materialising out of nowhere to put up his hand for the huge role of Stage Manager Casting ls always a challenging task. As much as you advertise for auditions, sometimes not many people seem to turn up. So, some of the community will tell you, that I was out there canvassing. Fortunately some actors appeared. We had a read through, and’I don’t know, but somehow I felt that for once maybe that f#$%er fate was smiling down on me”. Apart from Craig Howe, (this is his acting debut) I have at some time worked with all the other actors, either as a director, stage manager, producer or in marketing/publicity. I am in awe of their dedication to the devotion of their roles, and it has been a pleasure to work with them all over again. There were many emotions and laughs during rehearsals. I thought when I directed the outdoor epic, The Wind in the Willows in November 2006, that it was a huge ask of everybody, but this show in particular has it’s own staging difficulties. The collective creative talent/genius of Giles Tester and (I am proud to say) my partner Col Philip on set design has been awesome. This combined with Neville Newman’s technical design and installation, bring to you this portrait of LVs life.

In 1965 I did a solo on stage at the Wyong Memorial Hall. Mrs. Gertrude Achkurst of the blue rinse set-was an old lady who used to live over the back fence and every year she put on a big concert to raise funds for handicapped children (as they were called In those days). She took a liking to me and I became her star opener in a lot of her shows. Except this was the first show I opened on my own. I had to sit on a swing and sing ‘Little yellow Bird’ (can’t even remember how It shoes), and I GOT STAGE FRIGHT!! Someone had to come on stage and prise my fingers off the swing and carry me off stage. I was still In the shape I was when they carried me off stage. The sad thins Is-the next year I went back for more

The Twits
Scroll to top